Shawn has finished the new album with producer Alessandro Del Vecchio the 1st single All Stand Together made critical acclaim...! with radio charting at # 39 on hot AC and Rock radio . Together with his band,"ONLY THE BRAVE",this being his 4th album ​. 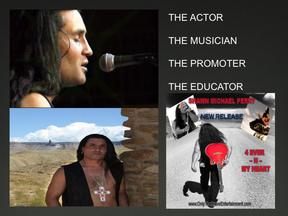 Shawn has opened for and shared the bill with

Shawn's songs "If I" Forever ,Brother In Arms, Pipe Of Peace and Family has consistently been in the top 20 in county rock and adult contemporary radio formats across the world.​ 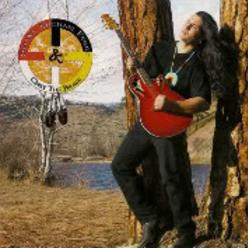 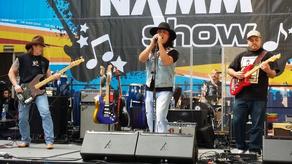 Only The Brave Indigenous Music Consultants
Shawn Michael Perry & his wife Belinda (owners of OTB – ATC) noticed there was a lack of representation for Native American artists all across the board. From concert logistics, artist management to music distribution (for Native Americans) in film, television, and all areas of the arts. All That Culture has been approached by numerous entities to consider taking on this mission to help promote Native Americans along with their careers. With Shawn’s personal experience and desire to help his peoples, it was an honor to take on this task! With Belinda by his side, this team has successfully signed on new clients and has moved forward in a direction that has taken OTB to new heights!

Our sister company “All That Culture Music of The Americas” specializes in selling musical instruments wholesale for education and instruction in North and South America. As members of the “National Association of Music Merchants”. We at OTB noticed many Fortune 500 music distribution companies and their manufactures had little or no relationships with indigenous music artists. We wanted to make a change! We as a company can outfit any tribal casinos/event center, school, tribal complex, and hospitals with all your music media needs!

Shawn Has Been Nominated For La Music Awards 2014 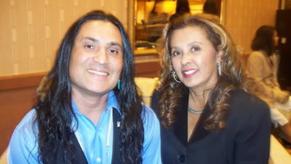 ​Shawn Michael Perry has taken the multi-hyphenate to new heights.

Shawn first came to the public’s attention through his acting skills. He has appeared in films as diverse as Last of The Mohicans, Wild Bill, The Witness, On  Deadly Ground not to mention television productions such as Star Trek The Next Generation, Murder She Wrote, Dr. Quinn Medicine Woman and CBS after school special My Indian Summer.

His stage credits include the highly acclaimed Ghost Dance at Los Angeles Actor’s Gang Studio. In 2009 Shawn played the original “Chief Neawah” in “So Far From Scioto” at the acclaimed Colonial Williamsburg Foundation. An Indian initiative to include the histories of the Native peoples in the early 18th century.

In October 2010 Shawn was the First Native American to be featured in a commercial for The Ad Council called “Ruckus” on fatherhood (a President Obama initiative) which will run through 2013.

Our goal is to put music back into the classroom. A portion of our tour proceeds will be donated to schools in rural areas to establish musical programs. Please see our "ALL THAT CULTURE" page for insight on our educational program "All That Culture Music of The America's". Thank You to KMC/ Latin Percussion/ TOCA / Ovation, Strumstick for supporting our music program!​

All That Culture Music of The Americas
Perceiving a growing need for musical opportunities for K-12 students, and in response to our economy’s effect on education and the music products industry, Latin Percussion Musical Instruments and All that Culture, are pleased to announce a collaborative effort bringing music education to classroom educators and schools in rural and tribal reservation settings. Spokesperson and Ovation/LP endorsing artist Shawn Michael Perry is eager to help raise awareness and funding for said work through his organization All That Culture (ATC). In the beginning, All That Culture teamed up with Samick Music Corporation and Greg Bennett design to provide much needed musical equipment for a rural school in Barasparmba, Ecuador. This year, Shawn Perry along with FENDER/ KAMAN music intend to reach further to The Spirit of “No Voice, No Talent, No Culture Unheard.”

Actors From "So Far From Scioto"

Music awards in 2014 for “Male Singer Songwriter of The Year”, “Hot AC Album of The Year”

for his album “Shawn Michael Perry & Only The Brave, Special Edition”,

“Hot AC Single of The Year” for his song “Family”.

Shawn’s talents include theater, voice-overs along with providing music (including other talented artists we represent) for film & television. Shawn has been a member of SAG and AFTRA for over 20 years. In 2020, Shawn has accepted roles in the movie  No Time to Run   just completed filming. Now in 2022 Shawn's new movie, No Time To Run is finished and will be released on Vimeo.

Highlighting the human experience as seen through indigenous eyes. The strength of his music and beauty of his words was enhanced by producer John Avila, the talented bassist/producer of Oingo Boingo. Shawn and John furthered their collaboration by placing FIGHT in a documentary/drama about PONCHO GONZALES the famed tennis master which aired on SPIKE TV in 2006.

Final polishing was added by the skillful mastering of techniques of Ron Mc Master (Capitol Records). The results were marketed as the limited edition "RUN 2 U". Tracks "FREEDOM" received terrific response and airplay.

Due to their popularity these songs are featured on the full-length CD "SHAWN MICHAEL PERRY & ONLY THE BRAVE SPECIAL EDITION CD". Shawn was chosen as "Top Ten ALBUM sold through "CD Baby" 2011.